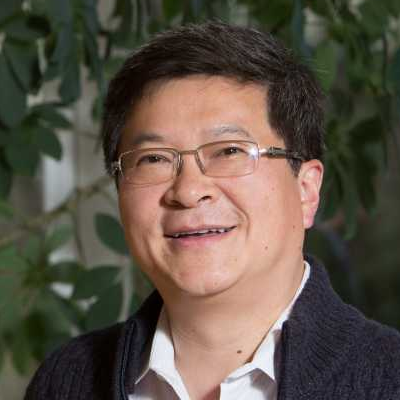 Bacteria allocate their proteome to various cellular functions according to simple “growth laws” arising from basic physiological constraints. However, the connection of these empirical laws to known mechanisms of gene regulation is largely lacking. We performed extensive multi-omics studies with absolute quantification for E. coli across a broad spectrum of growth conditions, providing a detailed quantitative view of gene expression at multiple levels. A plethora of results led to two principles of gene expression across growth conditions: first, the majority of mRNAs have similar translational characteristics and stability. Second, total mRNA synthesis flux is coordinated tightly with translational capacity, accomplished through the sequestration of RNA polymerases. These two principles lead to a simple, quantitative formulation of Central Dogma, which quantitatively account for the generally complex, non-intuitive dependences of mRNA and protein levels on promoter activities. This knowledge is essential for accurately inferring gene regulatory interactions from -omics data as well as for guiding the design of genetic circuits for synthetic biology applications.

Terry Hwa is the Presidential Chair Professor of Physics with joint appointment in the Division of Biological Sciences at the University of California, San Diego. He received his B.S. in physics, biology and electrical engineering from Stanford University in 1986 and his Ph.D. in physics from the Massachusetts Institute of Technology in 1990. He pursued postdoctoral research in statistical physics at Harvard University from 1990 to 1993 and was a long-term member of the Institute for Advanced Study from 1993 to 1994. He joined the physics faculty at UC San Diego in 1995 where he has been ever since. Hwa is an active proponent of interdisciplinary research and the inaugural co-director of the graduate program in quantitative biology at UC San Diego. He is a recipient of numerous awards including the Sloan and Guggenheim fellowships, and he is a fellow of the American Physical Society and the American Academy of Microbiology.

For details of his research and recent publication, please visit HERE.